Save Your Retirement Assets from Confiscation 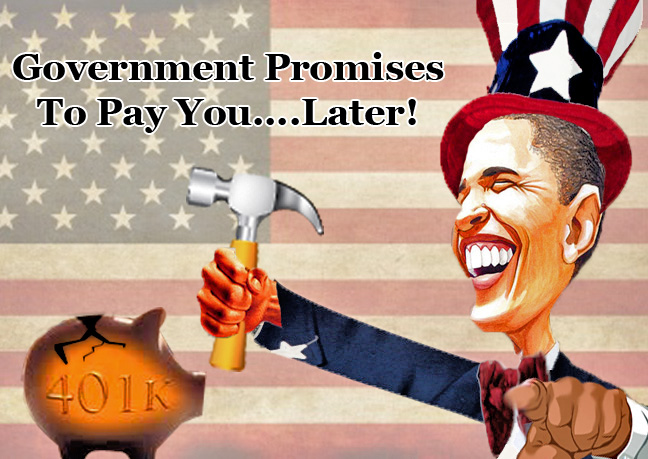 We’ve preached long and hard about how Congress and the army of unelected thieves in Washington are drooling over the low hanging fruit which are the $ Trillions in your qualified retirement accounts. People like Ron Paul, who spent decades as leader of several Congressional Finance committees is on public record as stating that the conversion of your retirement funds to worthless government bonds is imminent. Other Congressmen are fully aware of these plans, they just lack the veracity of former Congressman Paul.

By the way, if you’re waiting for any more warnings, you may be making a grave miscalculation. That’s it folks. You’ve been more than adequately warned, and don’t think that the practiced sheep shearers in Washington, will bumble this one. It has been in highly secretive planning for quite some time, and whenever the hammer down date is, you’ll go to sleep one night thinking you had a retirement account invested in sketchy mutual funds, and wake up to learn that it has been converted to worthless USG treasuries.

Maybe they’re right. If you still have your retirement funds invested in mutual funds in the US stock and bond markets, they probably are protecting you from losses. For the tiny fraction of you out there who see what’s going on, you can still legally do a tax-free rollover of your retirement account to a Self-Directed IRA (SD IRA).

There are a few different types of plans out there. Traditional IRA’s, Roth IRA’s and 401(k) plans comprising the vast majority. Many of the 401(k) plans which were set up by employers, look like sweetheart deals with the investment houses, wherein you may invest a portion of your salaries, pre-tax, as long as you invest in a sad looking basket of investment options offered by the Third Party Administrator (TPA).

Under the law which enabled such tax deferred investments back in the 1970’s, ERISA, the company is required to 1) have a designated plan administrator on staff, and 2) Provide you with a Summary Plan Document. Your HR department is probably the place to start to inquire as to whether or not you actually control your own retirement account.

You should dedicate an hour or two to review your Plan Document in order to find out whether or not your retirement account is under your control, or that of your employer, and their hand-picked TPA.
If you are forced by the Plan Document to be invested in the US stock and bond markets, we strongly suggest that you liquidate your tax-deferred plan, pay the taxes and penalties, and then move the remaining proceeds offshore, and out of the US banking system, and the USD.

If however, you are in control of your own tax-deferred assets, as you should be as big boys and girls, then we just as strongly suggest that you take full advantage of the tax code, and maintain those tax-deferred benefits. However, if it’s currently in the US banking system, and worse, invested in the US stock and/or bond markets, you should immediately do a tax free rollover to an offshore SD IRA.

Not only will you save the current hit of taxes, at your current high tax rates, in addition to a hefty penalty, but you will be able to protect your assets in jurisdictions which still respect due process of law. Once offshore, under a properly established LLC, and in a private, well managed offshore bank, you will be able to invest in virtually anything and without fear of an executive ordered confiscation.

We have not only helped clients move their assets offshore, but also subsequently helped them make good deals on foreign real estate. How about a good deal on a Medellín penthouse, or San Pedro beach house? Under an SD IRA you could rent that out, using Airbnb, for example, and the revenues would remain tax-deferred.

You could also immediately diversify your fiat currencies so as to hedge the serious downside threats of the USD. Maybe some well managed Swiss Francs or Singapore Dollars, for example. We can also set up a brokerage account offering 25+ international exchanges, if you have the guts and wherewithal to invest in any stock markets in these turbulent times. Precious metals purchasing and storage in Liechtenstein is available as well.

THE STEPS TO IMPLEMENT THE PROTECTION PLAN

We have helped dozens of clients (why only a few dozen boggles the mind) to legally move their retirement accounts offshore. It is a four step process.

2) Establishment of an offshore LLC, as an asset of the IRA, to hold the investment assets

3) We’ll set up a private bank account under the LLC to receive your liquid funds from the custodian.

As manager of the LLC, and sole signatory on the bank account, you are now in complete control of your assets. No more ticking of boxes to elect a lesser of evils to invest in. Stock mutual fund? Bond Fund? Get serious. As I’ve stated recently, the primary goal right now is to simply not lose money.

Our fee to carry out the above is only $3,200 ($2,900 for TDV Premium subscribers). Compare that to the taxes and penalties you would pay to take a distribution of the entire amount. In addition, your future earnings from any investments will also remain tax-deferred. At year end you will be provided a simple 1-page form by the custodian to report the current market value of your offshore IRA investments.

The custodian will then file the required forms with the IRS. Your tax reporting is not significantly changed. If you require assistance we also offer compliance services.

Reply to this email to set up a call.

I worked for several years with Big 4 CPA firms in both the US and Saudi Arabia, and then spent many years as a multi-national corporate Controller and CFO in places like Florida, Riyadh, Abu Dhabi, Cairo, and Medellín. In my second, free life, I’ve found satisfaction helping others get out of Dodge after almost 2 decades as a permanent expat from the former America. I just made my way back to Colombia from a two-year+ journey through South America by motorcycle, in order to scout the best locations for those wanting to escape from the collapsing industrialized world.